By David on May 3, 2012 in Curated Backchannels

I am a huge proponent of backchannel learning. There are many conferences I would love to be able to attend, but my budget can only accommodate one or two each year. The backchannel is an excellent resource for learning from a conference or event that you are unable to attend in-person.

I find collecting and reviewing backchannel resources to be a valuable learning experience for me, even when I am attending a conference in person. Sharing these collections on this blog has shown that others find value in the collections as well. 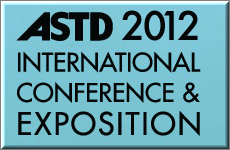 This post collects the resources shared via the backchannel of the 2012 ASTD International Conference and Exposition, being held May 6-9 in Denver, Colorado.

Pre-Conference Posts
This is it. #ASTD2012, Denver, CO, USA. Here I come. by Serene Goh
Tips for Getting Ready for ASTD2012 video series by RedFeatherNetworking
How to Learn from a Conference You Aren’t Attending by David Kelly
12 Things To Put On Your Must Do List For ASTD ICE – #ASTD2012 by LDGlobalEvents
20 Things to Do Before ASTD ICE 2012 by Ann Shea
Behind the Scenes at ASTD – Getting Ready for ASTD 2012 by Amanda Riordan Caceres
What My Network Expects at ASTD2012 ICE by Dan Steer
Getting the Most From the Conference ASTD Webcast Recording
Traveling to Denver for ASTD ICE? Places to eat in the Downtown Denver area (LODO) by LDGlobalEvents
#ASTD2012 Social Media Back Channel Chat Tools by Trish Uhl
Ready, Set, GO! ASTD International Conference 2012 by Kella Price
Get the Most Out of Networking at ASTD 2012 by Wendy Terwelp
ASTD 2012: 50-plus jaunt by Johan Ceulemans
Reflection: A Critical Component of #ASTD2012 Learning by David Kelly

John Kao Keynote
Getting to the high ground of innovation through jazz improvisation by Dan Steer
Nike “Failure” commercial featuring Michael Jordan shown during keynote
What All Teachers Should Learn from Jazz-band Teachers by William Klemm
John Kao’s website
Can we all be ‘Artists of innovation’ like John Kao? by Hannelore Calmeyn
John Kao, The Innovation Sherpa by Isabelle Extergem (in Dutch- Use Translate.google.com to translate to English)

Session Specific Resources
Parts of the Brain Psychology Project YouTube video shared by Sharon Wingron
Sources for ‘Bumper Music’ for Radio Shows by McCain Foods
The Extra Prepared Virtual Trainer Checklist by Cindy Huggett
Traditional Versus Agile Learning slide by Vicki Swisher
Learning Agility – the “X-Factor” of our future leaders by Dan Steer
The Yin and Yang of Formal and Informal Learning by Allison Rossett and Frank Nyguen
The Yin and Yang of Formal and Informal Learning tool from Allison Rossett and Frank Nyguen
Inspiration of Disney leadership by Paul Aartsen (in Dutch – Use Translate.google.com to translate to English)
Disney’s approach to leadership development by Evert Pruis (in Dutch – Use Translate.google.com to translate to English)
Aligning management development to today’s trends by Dan Steer
Vicki Swisher on Learning Agility YouTube video posted by Dan Steer
Defining Return On Expectations by D-comma
John Boudreau says HR has to change it’s approach by Dan Steer
Create or curate? That is NOT the question by Dan Steer
Website Wireframe Wikipedia page shared by Sarah Bloomfield
The perfect learning platform = Mobile + Brain by Dan Steer
Sarah Bloomfield on the (non)consulting mindset of L+D professionals by Dan Steer
The inner leadership journey Storify by Evert Pruis
Twitter for Trainers session materials by Kella Price
Twitter for Trainers slides by Kella Price
If you want to show value, you’ve gotta have business acumen by Dan Steer
90 Seconds to Impact: Building Influence & Driving Career Success slides by Sardek Love
It’s an ICE Time to Leave ADDIE Behind by Richard Sites
The Kinect at Lakeside Center for Autism video shared by Chris Pirie
Lakeside Center for Autism uses technology as treatment tool by Warren Kagarise
The Flipped Class: Myths vs. Reality by Jon Bergmann, Jerry Overmyer and Brett Wilie
Leaving ADDIE Behind slides by Michael Allen (via ZebraZapps)
Onboarding GenY: Breaking old habits to build new habits by Dan Steer
The Most Complete Twitter Application List Available – 2011 Edition by Eric Goldstein
Do leaders need to make employees happy? by VOV (in Dutch- Use Translate.google.com to translate to English)
Ford Social Media Guidelines shared by Jane Bozarth
The Respect Effect Rocks Hard Rock Cafe by Dan Steer
What Can You Do in 140 Characters? slides by Jane Bozarth
Quickly Personalize Projects with Custom, Inexpensive Avatar Animation resources shared by Allen Partridge
Social Media for Trainers resources shared by Jane Bozarth
Live Blog from the ASTD International Conference: Gamification & Learning by Darlene Christopher
Increase learning engagement and effectiveness with Gamification by Dan Steer
Culture Change to Avoid Catastrophe – Lessons from the Oil Industry slides by Ann McGregor and Doug Upchurch
My 2012 ASTD Conference Visit and (Downloadable) Presentation by David Stein
Make work a better place for all: Interview with Author Julie Clow by Sarah Bloomfield
Van Gogh on Learning slides by Ger Driesen (Added 5/14)
ASTD session on Talent Management by David Wee by D-Comma (Added 5/14)
Jams and Vincent Van Gogh, or the universality of great art. by Johan Ceulemans (Added 5/14) (in Dutch- Use Translate.google.com to translate to English)
7 Reasons Why Strength-based leadership development just works better by Jan Laurijssen (Added 5/14) (in Dutch- Use Translate.google.com to translate to English)
ASTD MP3 & Lyric Zip file shared by Billy Kirsch (Added 5/14)
With a little help from my Peeps! slides by Dawn Mahoney (Added 5/14)
My commencement address for the workforce learning class of 2012 by Allison Rossett (Added 5/14)
A Formula for Making Learning and Development Stick by Jack Zenger, Joe Folkman and Bob Sherwin (Added 5/14)
The 80/20 Rule of Learning Transfer by Michael Leimbach and Ed Emde (Added 5/14)
#ASTD2012 – integrating learning and development with compensation and rewards by John Ingham (Added 5/14)
Jamming and Vincent Van Gogh or the universality of great art by John Ceulemans (Added 5/18)

I will be adding to this list as I continue to review the backchannel transcripts and find resources. I will tweet updates occasionally as additional links are added. If you know of a valued resource I should add to the list – or if something is inaccurate – please add it to the comments or tweet me a link to @LnDDave.

If you find these collections of value, I have posts that consolidate the backchannel resources from other conferences. An archive of all of these posts can be accessed by clicking the link below: