What Exactly is a Backchannel? #SLBootCamp 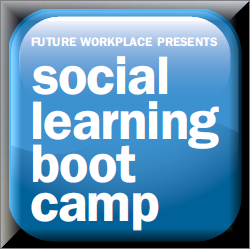 The next Social Learning Bootcamp is fast approaching, taking place March 7-8 at Georgetown University Conference Center in Washington D.C.  In addition to connecting with other attendees in-person at the event, you can also connect with others on Twitter via the event’s backchannel, using the hashtag #slbootcamp. The backchannel is an excellent resource that adds even more value to your conference experience.

Backchannels extend your learning beyond just the live event. Prior to the event, backchannels enable attendees to connect with one another and get to know one another. The enable sharing that starts conversations that continue when the live event actually starts. During the event, backchannels are an excellent resource for extending learning as well. Attendees (and those following the backchannel from afar) can share key learning points and expand on the learning by adding their own reflections and related resources. Backchannels also help reinforce learning after the event, as people share their reflections about what they’ve learned and how they are applying new skills.

Backchannels can also be a great source of future learning, as the resources that are shared can be referenced as a continuing source of learning for weeks and months after events end.  At Social Learning Boot Camp, the backchannel will be curated so that the valuable resources being shared are available as an ongoing reference and learning tool after the event.

While backchannels take place via Twitter, the value of the backchannel is in the sharing, not in the technology. In much the same way that a person can not really appreciate the joy of riding a bicycle until they can do so without consciously focusing on balance and pedaling, getting the full value of a backchannel requires an understanding of what the backchannel is and how you use tools to participate in it. So what exactly IS a backchannel?

…the practice of using networked computers to maintain a real-time online conversation alongside the primary group activity or live spoken remarks. 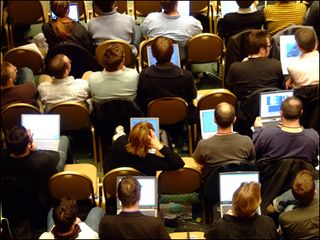 That definition, while accurate, is somewhat misleading. The phrase ‘networked computers’ conveys an image of desktop PCs that are connected to one another through a network. In most cases, the computers used in a backchannel aren’t found on a desk; they’re found in your pocket. If you’ve been to a conference or training event in recent years, you’ve probably had this experience.

You’re sitting in a conference listening to the speaker, and the person next to you appears to be more interested in their tablet or phone than in what the presenter is saying. Then as you look around, you realize that there are plenty of others that are typing away at their Blackberry, iPad, laptop, or other electronic device – all while the speaker is presenting.

Years ago this sort of activity would be seen as rude and disrespectful to the person speaking. It was a sign that the attendee was disinterested in what was being discussed, and had their attention elsewhere.

Quite often, the scenario described here is actually showing the exact opposite.

In some cases it may simply be that the notes that were once taken on paper are now being taken electronically. What’s taking place in increasingly large numbers is that people are going beyond just note taking, and have begun to interact with the information being discussed in new ways.

Through social media (usually Twitter), conference attendees can share their thoughts and ideas about the information being shared with others. It could be as simple as taking the notes I might normally compile for myself and sharing them with the world at large. What’s more exciting about this sharing is it extends beyond just notes from the presentation. Conference attendees share their own thoughts and experiences about the content. They share additional resources that add to those shared by the speakers. In short, through their sharing, they expand the content and become a part of the experience.

Even more powerful is that this sharing breaks through the walls of the session, sharing the content with anyone that is interested in reading it – even those that are not attending the session. It is this sharing and expansion of content during a live event that is referred to as ‘The Backchannel’.

To truly understand and appreciate what the backchannel is though, you really need to participate in it. The time to think about that isn’t when you arrive for the first day of the conference. That would be like throwing a first-time swimmer into a stretch of river rapids. If you are interested in participating in the backchannel, the time to think and prepare for it is now, before the conference begins.

Most backchannels currently take place using Twitter, so preparing to participate in a backchannel requires that you sign up for a Twitter account and begin monitoring and interacting with the backchannel feed. Next week, I’ll be sharing another post that provides tips for doing just that.

← Curation: Beyond the Buzzword – Resources shared at #ASTDTK13
How to Participate in a Backchannel #SLBootCamp →