As I mentioned in the first post in this series, I’m writing a series of posts about Glass, and the implications and applications of the device on education, learning, and performance. Before we can truly explore the possibilities of the device, we must examine the device itself, and the technical functionality it provides.

That’s what this post is about: an exploration of what Google Glass is and does. However, I don’t approach this from a hardcore tech perspective. I am looking at this device from a more accessible definition of “what does it do?”. If you want the hardcore exploration, including full technical specs of the device, you can find a post covering it here.

The Physical Device Itself

Google Glass is a device that is worn similar to a pair of eyeglasses. However, it does not (currently) come with permanent lenses. It’s called Glass (instead of GlassES) because the device features a single small glass-like display through which the person wearing Glass can interact with content.

The frame itself is made from titanium, and seems to be very durable. It also enables individuals to bend the frame slightly for an individual fit. Unlike traditional glasses, Glass frames to not have the traditional curved ends the tuck behind the wearer’s ears. The left side of the frame is just a thin and straight bar. The right side of the frame is much thicker, as it is where all of the technical components of Glass reside. 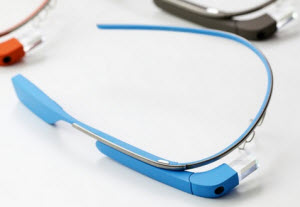 The ‘glass’ of Google Glass is actually the display. A popular misconception about Glass is that the display goes over your eye; it does not. The display resides above your right eye within your peripheral vision, but does not block your core eyesight. Viewing the display in glass is as simple as a slight glance upwards.

Looking at the Glass display

Many people have asked how a display that small can be of value. While it is small, the positioning of it is like looking at a 25-inch television from about 8 feet away. It is a full-color display, capable of displaying pictures, video, and other media. The display is clear, so whatever is behind the glass display can often be seen. There are times when you may need to adjust your head to position the glass display against something so it is easier to view (such as looking away from a bright sky).

Another concern people have brought up is if the display being in front of only one eye is disorientating. I haven’t found that. In fact, I find it useful in that I can be looking at the Glass display, but still have a full peripheral view of my surroundings via my other eye. I’ll talk more on that in another post.

Glass includes an camera that records 5MP still pictures and high-definition video (720p). While this isn’t quite as good as the average smart-phone on the market today, it is serviceable as a camera. More importantly, it is a good camera to enable the long-term possibilities of Glass – especially for learning – through applications such as augmented reality.

There is 16GB of storage (about 12GB usable) on the device. While this is not a huge amount of storage, it seems to be working fine so far. Glass links to your Google+ account and automatically uploads your pictures and video there (without actually posting them for others to view).

The Touchpad and Voice Interface

Just behind the camera is a long bar along the frame. This bar is actually a touchpad. There are two primary ways to interact with Glass – through the touchpad and via voice. We’ll explore that deeper in the “How it Works” section later in this post. 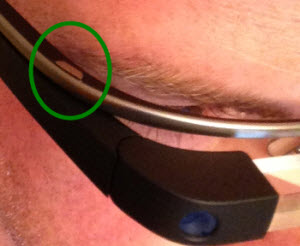 Glass uses a bone conduction speaker on the right side of the device. Bone conduction speakers conduct sound to the inner ear via vibration through the skull (instead of vibration via the air). Part of the appeal of bone-conduction is that it is more personalized and private than traditional speakers which others may hear. In actuality, the speaker is one of the few features I’ve been disappointed in with Glass. I find the sound difficult to hear in quiet spaces, and impossible to hear in noisy environments. This seems to be a very common complaint among those in the Glass Explorer program, so I would be surprised if it is not addressed somehow before the device is sold commercially.

Using Glass is surprisingly easy. A simple tap of the touchpad will activate glass. From there you can use voice commands to use much of the device functionality. Saying “OK Glass” will let Glass know you are about to issue a voice command. Current examples of voice command include the following (keep in mind I would expect this list to expand by the time Glass is commercially released. 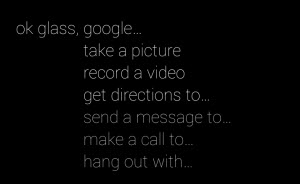 The Glass display shows prompt options after the “OK Glass” command is given.

You can also use the touchpad to execute these commands and to navigate other aspects of the Glass interface. The touchpad has a few primary ways of providing input:

The touchpad interface is one of those things that doesn’t translate well in writing; it really needs to be experienced. It takes a little getting used to at first, but once you become accustomed to it, it’s intuitive.

In it’s current state, Glass provides the functionality already described in this post, including:

That list, if looked at in isolation, is not impressive. In fact, some people might look at the functionality list and think “That’s what I have my phone for.”

The potential of a device like Glass isn’t in that list – it’s in the possibilities people explore and in the innovations people develop using the device, and that’s going to come predominantly from the developers of Glass software, or “Glassware”.

As of today there are only a few Glassware programs available, including GMail, Evernote, social media applications like Facebook, Twitter, Path, and Tumblr, and media companies like Elle, The New York Times, and CNN. In all cases, the functionality is limited, and as I mentioned in my previous post, seems to be in a piloting and testing stage.

Even at this early stage, and even having only had the device for a little more than a week, some of the possibilities of Glass are becoming apparent. Here are some early examples:

So that’s my initial take on Google Glass as a device. What are your thoughts? Did you expect something that I haven’t mentioned? Is there something about the device that you have a question about?

As I mentioned in my opening post, this series is about us exploring Glass together. Feel free to add your thoughts and questions via the comments,.