Over the last 24 hours the internet has been taken over by references to Miley Cyrus and ‘Twerking’. When I see the world focusing it’s attention on things like her display at the Video Music Awards, I get worried. I have two young kids, and the last thing I want them thinking is that you need to act that way to be rewarded by society. Even if you don’t have kids, you should be concerned about the messages we send to our youth, and the types of behavior we reward as a society. 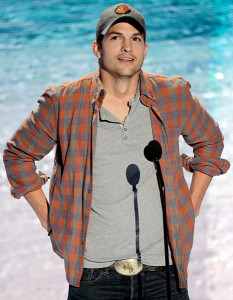 But it’s not all bad news. Every now and then, we see a message that is positive, and gives us hope. For me, that message comes from a most unlikely source: Ashton Kutcher.

Ashton, or “Chris” – which is his real name that was revealed during his speech – won an award at recent Nickelodeon’s Kid’s Choice Awards.  He gave an incredibly inspiring speech with some great messages that I think everyone – kids and adults alike – can learn from. Here are a few highlights:

One of my favorite quotes from the speech: “Opportunities look a lot like work”.

There’s a lot of entitlement in today’s world, and it’s not just among the young. A lot of people expect the world to be handed to them. It’s refreshing to hear a celebrity talk about earning opportunities, and to talk about how having good work ethic creates opportunities.

To paraphrase Kutcher,the sexiest thing in the entire world is being really smart, and being thoughtful, and being generous. Too often the message we send is much more superficial. What society values is based on appearances; I’d much rather live in a world where people are rewarded for the value they bring to others. That’s what really matters. Everything else “is crap that people try to sell you to make you feel like less”.

This was my favorite part of the speech. Too often we follow the path that is set for us. We allow life to dictate our path. The problem with that, as Kutcher states, is that “everything around us that we call life was built by people no smarter than you.” I don’t want to have life happen to me; I want to set my own path. That’s what I want for my kids as well.

You can see the full video below. I encourage you to watch it yourself, and to share it with others, especially young people.

It bears repeating: “Build a Life. Don’t live one, build one.”

Thanks Ashton Kutcher, for providing a positive message to today’s youth.