Exploring #GoogleGlass: Speaking at a Conference with Google Glass

Last week I spoke at an industry event. I speak at a number of industry events, but this time was a little different. This was the first time I actively used Google Glass during my presentation. 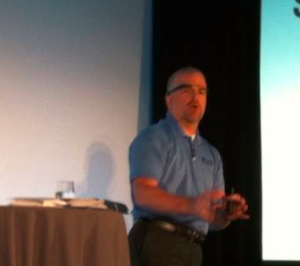 For those not that familiar with it, Google Glass is essentially a head-mounted computer device. While it can process different types of actions, at this point  Glass is still somewhat limited. Glass is still not available publicly. It is only available to those participating in Google’s Glass Explorer Program. I’ve been a part of the program for a few months, and much of the experience evokes the word “BETA”.

That’s not a bad thing; Google has been regularly tweaking and updating the interface and firmware based on the feedback provided by those in the Explorer program. At the same time, developers are working on “Glassware”, which are essentially apps designed specifically for Glass. One piece of Glassware that is already available is Twitter.

Like most other areas, the Twitter Glassware app is a stripped-down version of the full Twitter experience, focusing on what are considered to be the most important functions. One of the few things that the Twitter Glassware app pushes to the Glass user are mentions. If you’re not familiar with the term “Mention”, it essentially means that someone used your Twitter username in a post (hence, you have been mentioned).

Whenever I complete a speaking engagement, I always check the Twitter feed to see what sort of feedback and sharing took place among the attendees in the backchannel. I find this to be very useful feedback on my performance, and the sharing expands the learning beyond the physical constraints of the session. When I’m conducting an extended workshop, I’l often check the tweet stream during breaks, which is especially helpful as sometimes the tweets that are posted are feedback that causes me to adjust the rest of the presentation.

Since Glass pushes mentions to the user, I decided to see what it would be like to use Glass during my session. It was essentially an experiment. I expected to receive prompts via Glass that contained feedback from Twitter in real-time, while I was conducting the session. While not perfect, it was an interesting and valuable experience that I suspect I will repeat often in the future.

Glass really isn’t distracting to wear and use. Once you’ve worn Glass for a short time, you really do forget that it’s there, just as you would a normal pair of glasses. At this point, I would say Glass is more distracting to those seeing someone wearing it than to the wearers themselves.

I was able to conduct my session exactly as I would have during a session in which I wasn’t wearing Glass. A number of times during my session, when someone posted a tweet that used my username, I would get a small “ding” from Glass and the Tweet would display on the screen. 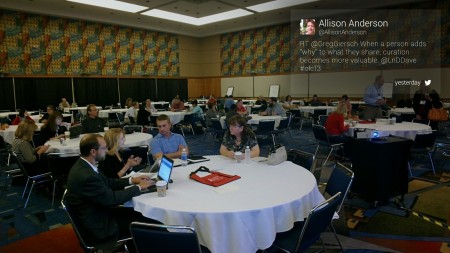 This was surprisingly intuitive. The notification did not throw me off, and the quick glance of what the tweet said did not even seem to be noticed by participants. I spoke with a number of people after the session ended, and a few asked about Glass. A common question was “were you using it during the session?” which leads me towards my previous comment of my quick glances at tweets not being a distraction. (In truth, I often used looking back towards the presentation screen as a way of masking my glance, should it be obvious)

The feedback was universally positive, which is what I ideally would like as a presenter. For this experiment though, it would have been interesting to see how I reacted if I saw negative comments pop-up. Obviously I wouldn’t find the person in the room and confront them, but I would probably try to adjust my session in-the-moment to account for the feedback. I’ll file that away as an opportunity for a future speaking engagement.

I mentioned earlier that Glass is more distracting to those seeing someone wearing it than to the wearers themselves. This was true during the session. I strive to keep people engaged during my sessions. That means keeping them focused on what we’re discussing. Right now, Glass is a distraction from that.

My session was exploring content curation. People came interested in that topic. Any time participants spent on thoughts like “Is that Google Glass? I wonder if he’s actively using it while he’s presenting?” was diverting attention from the purpose we were all in the room for.

I’m sure in the next year, as Glass (and tech like it) become more commonplace in our day-to-day lives, this sort of distraction would decrease. Until the novelty of it wears off though, I expect wearing Glass to continue to be a distraction to those around me.

Another limitation of the experience is that I can’t control what was pushed through Glass. There were 36 tweets that used my username (@LnDDave) posted during my 60 minute session. While most of those tweets were pushed through to me via Glass, some were not. Having the option to set filters for what would be pushed to me and when would have been helpful. Again, I would expect functionality like this to be added as Glass and the Glassware apps that power it continue to evolve.

The best way I could sum up the experience would be to answer a new question: Would I recommend using Glass will leading a speaking session or workshop? Yes, but with a big asterisk. It would require the speaker or facilitator can use Glass in a way that enhances the overall experience for everyone involved. In this case, my using Glass enhanced my experience as the speaker, but did not enhance the experience of the participants. Had there been negative feedback pushed to me that I reacted to with corrective action, that might be a different story.

I was concerned after my session when people asked about Glass. People had great feedback about the session, but the session wasn’t about Glass – it was about curation. My wearing Glass distracted from that. A lot of that has to do with the novelty of the device, so I’m hoping that distraction naturally dissipates in the future as the devices become more commonplace. I think there’s a lot of potential to expand and enhance sessions like this via Google Glass.

Have an experiment you’d like to suggest regarding Google Glass? Please suggest it in the comments below.

← Project Sharing: A Great Source of Learning
How Docents Can Enhance Your Conference Experience →