#GoogleGlass at #DisneyWorld – An Example of Contextual Awareness

Last month I spent some time on vacation with my family in Walt Disney World. I spent most of the week wearing my Google Glass. 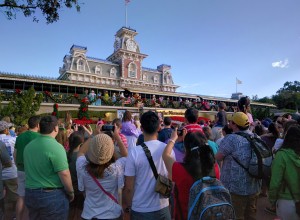 Wearing Glass is still not a completely natural part of my normal daily routine. Don’t get me wrong; as I’ve written in other posts, wearing Glass is feels completely natural and like regular glasses, you forget you’re wearing them after a while. But that’s wear the unnatural part comes in. I don’t wear prescription glasses, so when I wear Glass it’s for the purpose of wearing Glass. For Glass to be a natural part of my daily life, it would need to fit seamlessly into my daily activities in a way that enhances it.

To date, the Explorer edition of Glass (and the limited Glassware available) do this minimally. Most of what Glass pushes to me is important (email, tweets, news) but not necessarily content that is embedded into the flow of my day.

In Disney things were different. In Disney my Glass experience included something extra that made it much more powerful, and provided a glimpse into the future potential of Glass: Context.

Why Context is Important

While I was in Disney I still got the usual emails and tweets pushed to me that I was used to seeing. But from the first time I checked my timeline from one of the parks, I started seeing new types of content that was directly related to what I was doing in that moment.

The first example was content from a website called Yesterland, a website dedicated to Disney Attractions that no longer exist. While it didn’t change what I was actively doing, it was interesting to get history related to the parks while actively exploring it’s present. I can easily see concepts like this being used to help people learn. 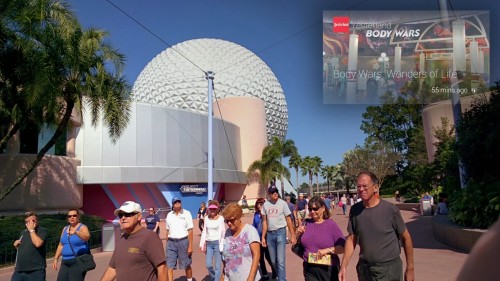 Another example was related to food, with Open Table and Zagat pushing restaurant recommendations and reviews to me during my visit. 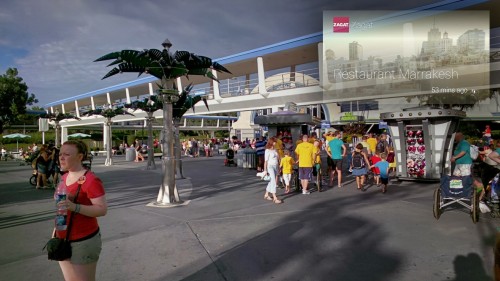 Google is also working hard at making Google Now a big part of the Glass experience, and it was very useful in Disney. Google Now provided a great deal of valuable content during the trip, including:

None of this was intrusive to my overall experience.

Another area in which my vacation was enhanced was via Glass’s video recording functionality. My kids wanted a video of one of the parades we watched, so I decided to record it with Glass rather than my phone (I don’t even bring a video camera on trips any more).

For me, this was a great example of how Glass can enhance personal interactions while still using the technologies many of use regularly in today’s world. When the parade started, I said “OK Glass, record a video”, and set the video to extend (By default, Glass records 10 second videos unless you choose to let it record longer).

Once Glass started recording, I was no longer engaged in my recording of the parade. You know what I was engaged in? My kids.

That sounds natural and obvious, but in practice most people don’t do that. As I looked around at people lining the street, there were two distinct groups: kids watching the parade, and adults watching their phone or camcorder screens as they recorded the parade. In truth, that’s likely what I would have done if I wasn’t wearing Glass. How many events do we go to today in which people are experiencing them through our smartphone screens instead of actually being engaged in the event itself?

How is that different? Well, as I said earlier, I was engaged in my kids. When my 4 year old screamed “Dad it’s Mickey!!” I instinctively looked at him. Glass caught the look of wonderment on his face and the utter joy that only a young kid can have at seeing Mickey.

It wasn’t until a few days ago when I looked at the videos that I even realized that Glass captured that moment. Why? Because I wasn’t thinking about the video recording at all; I was engaged in the moment.

That’s part of the power of Glass, both for personal use and for learning.

I should add that part of this enhanced experience came from a small but significant change in the Glass paradigm. Normally when I wear Glass, I’m wearing Glass for the purpose of the device. In Disney I really wasn’t. Most of DisneyWorld is outside, so I was wearing Glass with the sunglasses attached. It was a different paradigm. I wasn’t wearing Glass per se; I was wearing sunglasses that just happened to have Google Glass functionality.

This also played out in my interactions with others. I intentionally chose the slate colored Glass in hopes that the hardware would somewhat disappear when the shades were worn. This definitely was the case. Normally when I wear Glass (without shades) I get a number of strange looks and people come up to me multiple times a day asking about it.

I wore Glass for eight days at Disney and was only approached by someone asking about the device twice the entire time. I’ve said before that Glass – at this stage of it’s deployment – is still a novelty that is more distracting to people seeing someone wear it then to the person wearing the device. Wearing slate-colored Glass with the shades attached definitely minimized the “Look at that guy with the computer attached to his head” affect on those around me. This, in turn, made wearing Glass feel more natural to me as well.

The Power of Context

As Glassware is becoming more mature, we’re starting to see more and more software that goes beyond smartphone-functions-strapped-to-your-head. More and more developers re experimenting with the possibilities represented by Glass, and contextual awareness is a huge part of that, especially for learning.

← A Quick Pause for Thanks
Dear Training, It’s Time We Saw Other People →