How Performance Support Could have Changed #StarWars

It’s May 4th, and I’m a big Star Wars fan, so *obviously* that means it’s time for a “What can we learn about Learning from Star Wars?” post.

Here’s the thing about Star Wars. The Empire should have won the war. Without question, the rebels should have lost and the reign of terror led by Emperor Palpatine should still be going on. And really, all it would have needed was a Training or IT Director with a passing interest in Performance Support.

There are so many examples throughout the Star Wars movies of a member of the Empire making a mistake in the performance of their duties. And I’m not just talking about inconsequential mistakes like hitting your helmet on a door as you enter the room. I’m talking about mistakes that have enormous ramifications that could have helped the Empire maintain control of the galaxy.

With millions of stormtroopers stationed around the galaxy, bringing them all in for training to address every skill would cripple the Imperial budget. Similarly, it would be a waste of time to have stormtroopers take an elearning course covering a topic they might encounter at some point of their career. Sometimes an stormtrooper just needs the support in place to to help the completion of an infrequent task at the time the task is being completed.

Here are a few situations where the use of a performance support tool could have shifted the balance of power in the galaxy back to the Empire.

“How to Search a Spaceship” 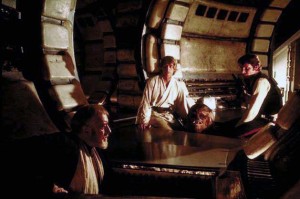 When the Millennium Falcon is pulled into the Death Star, it is immediately searched. That search appears to consist of two stormtroopers walking through the main hallways of the ship.

I’m not sure how long basic training is for stormtrooers, but like most training, it’s unlikely that the training would cover everything, so let’s assume “searching a spaceship” isn’t part of initial training. The fact that Han, Luke, and the others were not found during the search is all the evidence you need to know that performance in this area needs to improve.

How could this have gone differently? Easy. Remember when C-3PO and R2-D2 were in the escape pod and the Empire didn’t shoot them down because there were no life forms on board? Whatever tech was in place to know that was the case for the escape pod should be miniaturized, put into app form and provided via an Imperial-issued iPhone (Insert your Apple = The Galactic Empire jokes here).

Too techy? Fine. Hand the troopers a piece of paper (or “flimsy”, if I really wanted to geek-up this post) titled “Things to Look Out for While Searching a Ship”. I’m pretty sure “Check for secret compartments in the floor” would be in the first five bullets.

Add Laser Pointers to the Blasters 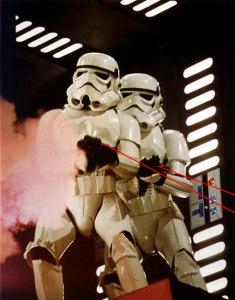 Holy cr@p, something is seriously wrong with the empire’s basic training as it related to blaster usage. Watching the Star Wars movie is like watching an episode of the A-Team; stormtroopers are shooting all over the place, and missing all the time.

Think about the scene in Star Wars when Obi-Wan Kenobi is killed by Darth Vader. Luke screams in horror, and the shooting starts. Twenty or so stormtroopers start firing. Have you ever thought about what Luke is doing at this moment?

The dude isn’t running for the Millennium Falcon. He isn’t even looking for cover. He is STANDING STILL. For about 5-6 seconds Luke stands with his feet glued to the floor until Ben Kenobi’s voice chimes in with “Hey Dumb@ss… Run.”

So in review: 5-6 seconds in which your target is stationary from a distance of maybe 30 yards… and none of the twenty or so stormtroopers can even come close? Somebody in their training department needs to be fired.

So obviously there’s serious need to look at the training involved here, but the empire could easily have rectified this with performance support. Throw a laser sight on each blaster so that stormtroopers can see where there laser will shoot.

Think about it. Luke screams and suddenly there are 20 red dots dancing around his torso like a laser-light show just before things start to go VERY badly for him. Problem solved.

Star Wars ends with the Battle of Yavin. It’s a race against time as the rebels try to destroy the Death Star before the moon comes around orbit into it’s firing range.

Wait, what? Back up a second.

The Death Star needed to travel to Yavin, so SOMEBODY chartered a course there. You’re telling me that a computer could not recognize that they would arrive in a spot where the moon would not be in range? If Google Maps can navigate the one-way maze that is New York City including roving roadwork detours in a way that provides the most efficient route to my destination, surely the software running the navigational systems of the Death Star could have recognized the deficiency in the proposed route and suggested an alternative.

If it does, the Death Star arrives and fires in seconds. The Rebellion would be over and we lose out on two excellent sequels and an arguably misguided set of prequels.

The Case for Performance Support

There are countless other examples I could share. Obviously the Empire’s training is woefully inadequate, and maybe the training needs of such a vast enterprise just were not scale-able. But there’s a silver lining in all this. Perhaps the new enemies that will present themselves in Episode VII next year will be better prepared and have performance support in place for their armies, having learned from the Empire’s mistakes.

Thanks for reading, and May the 4th Be With You.

← ASTD International Conference and Expo Backchannel: Curated Resources #ASTD2014
Why You Need a PLN, and How to Develop One: Resources Shared at #ASTD2014 →