The Expanding Definition of Social

I was having dinner with friends a few days ago and when the conversation skewed towards our work lives, one asked about the recent conference I hosted in San Diego. I explained this one of of the conferences I host for The eLearning Guild called the mLearn Conference and Expo. As is often the case when I mention mLearnCon (or mLearning for that matter) to someone from outside the elearning community, I was greeted with a puzzled look and the question “What’s mLearning?”. I replied with the very simplistic definition I usually provide when asked that question by someone with little contextual understanding of the field of technology-based learning and performance support. The definition usually sounds something like this: “Mobile learning is generally the use of mobile technologies like your iPhone as a means of helping you learn, connect with others, and ultimately receive whatever support you need to do your job better.”

That response generally results in one of two responses. It either satisfies the basic curiosity of the person asking the question and we move on, or it peeks a deeper curiosity that results in us taking a deeper dive into the world of mobile learning.

But this time was different, and the subsequent debate took up much of the rest of our dinner conversation.

One of my friends responded to that description with a groan, and snapped back “I know you’re a technogeek, but that sounds like everything that’s wrong with our country.”

Now being the person I am, and the type of friend I am, my reaction to that was two-fold. I genuinely wanted to find out what issue he had with mobile technologies and learning, while at the same time I felt a burning desire to point out the utter ridiculousness of what he had just said. It wound up coming out as “I’ll see if the waiter can bring a broom to help you with that sweeping generalization, but maybe you can be a bit more specific as to HOW what I said represents what’s wrong with our country?”

And with that, the floodgates opened. I’ll spare you the specific details, but his ultimate issue was one that I’ve heard a number of times over the years.

“All of this technology is making us anti-social” 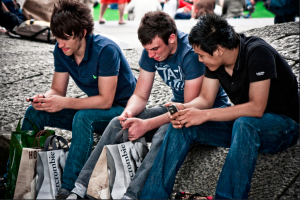 The argument here is that as more and more people are texting, facebook messaging, and using other digital means of connecting with one another, we’re losing the personal connections we make with people in face-to-face environments. Mark Britz shared an example of this in a recent blog post. He shared a story in which he and an office colleague connected on an instant messenger regarding a business need, and over the course of a few minutes shared some information and joked with one another. Later that day, the two of them passed each other in the hallway. No words were exchanged; just a head nod to each other.

Had my friend from dinner observed the encounters Mark described, I could see him crying out “See!?!?! That’s what I’m talking about!”. And he’d be dead wrong. That wasn’t an example of technology making us anti-social; it was an example of the changing definition of what it means to be social in today’s world. Mark described the interaction he had with his colleague as being at “the heart of social”, and I’d tend to agree.

Let’s change Mark’s story for a second. Instead of that first interaction taking place via Instant Messenger, let’s say it took place in person, face-to-face, during a chance meeting at the water cooler – with no technology being involved. If that were the case, would Mark’s second hallway encounter really look that different? If you had a conversation with someone during the day and you pass them in the hall an hour or two later, you probably would have the exact same reaction. Would you really stop to have a new conversation after you just spoke to each other at the water cooler an hour or so ago. Probably not. Technology wasn’t a barrier to social; it was just an added portal through which natural social interactions can take place.

The Expanding Definition of Social

Communicating with one another digitally isn’t a distraction from being social, it’s an integral part of what it means to be social in today’s world. It enhances and extends our ability to be social in many ways, and ultimately removes many of the barriers of location from the social landscape. The connections that are made and the relationships that are forged are just as real as those formed in face-to-face relationships. Need proof? Here are a few statements about my social relationships in 2014. I suspect at least some of these statements will resonate with the average person in 2014. 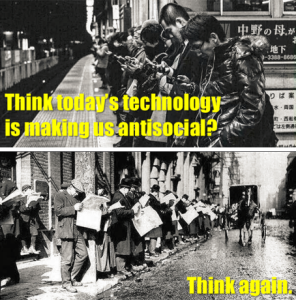 I honestly don’t think that the resistance behind “All this technology is making us antisocial” has much to do with technology at all. I think the resistance has more to do with change, and our natural discomfort with things that disrupt the status quo. That’s what I really see going on with social. The status quo of what it means to be social is rapidly evolving. For some people it’s a welcome change to be embraced; for others it’s something outside their comfort zone and that’s where the resistance comes from.

As with most things, people resist change until the perceived value of the change exceeds the current discomfort from the disruption it represents. I’m sure many of us know people that resisted social media tools for years based on generalizations like “I don’t care what you had for breakfast”. Many of these same people are now advocates for social media and other digital social connections. Why the change of heart? Because at some point they had that “A-Ha!” moment and suddenly the value associated with the change overcame their discomfort with the disruption.

It’s an Expansion of Social, Not a Replacement

Another aspect of the conversation with my friend that resonated with me was how often we look at things in absolutes. In my friend’s mind, we’re headed down a road where no one talks to each other any more and all we do is text and post to facebook. It’s unfortunate that fear of change often makes us see things in black and white when the reality is filled with various shades of grey.

Digital connections aren’t going to replace face-to-face connections, and they certainly are not going to devalue them. Quite the opposite is true. The regular and ongoing digital connections will make the face-to-face interactions more meaningful. On a personal level, friendships are strengthened forming deeper relationships. From an organizational standpoint, working relationships are strengthened forming stronger working relationships across the globe that make the overall workforce more productive.

Of course, too much of any one thing is often a bad thing, and digital social tools are no exception. As my kids grow older and have their own phones, I have no doubt that history will repeat itself. I will need to help my kids understand how to use technology in a balanced way to create relationships, the same way my mother would pick up the phone receiver from another room when I was a kid and say “You’ve been on the phone an hour David – that’s enough”.

The need for balance is important, both for individuals and for organizations. What we need to avoid doing is resisting new tools that can enhance our social relationships simply because the tools upset the existing balance. We need to embrace the new tools, and then re-balance accordingly.  That renewed state of equilibrium that includes these digital social tools is the new definition of what it means to be social in today’s digital world.