What Do People *Really* Think About That Course You’ve Designed? 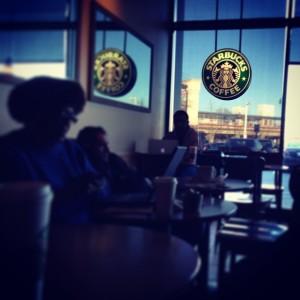 Sometimes we can learn a great deal when and where we least expect it. This past week I learned some things about eLearning while at, of all places, Starbucks.

I, like many people, enjoy the ambiance of Starbucks for getting work done. Last week was one of those times that I found myself sitting strategically at a table next to an outlet, laptop plugged in and Venti sized tea at the ready as I prepared to dive in for a few hours of productivity.

Unfortunately for me, the person sitting next to me wasn’t making that easy. She too was working from the Starbucks, but did not seem to be enjoying it.

It started with her talking to her screen, cursing it for not being able to log in.  She called someone, expressed frustration at being placed on hold, and then got increasingly angry as she was still unable to log in.

It wasn’t at all interesting, and was in fact distracting and annoying for someone who was himself trying to get some work done. Of course, I became much more interested when I heard her say “No, I’m able to sign into the laptop. I just can’t get signed into the training.”

Suddenly I perked up a bit. She was taking a training course, or more specifically, she was trying to and hitting roadblocks.

Once she was able to get access to the training, she quieted down considerably. In fact, over the next hour she yawned repeatedly, sat with her hand holding up her head, and often sighed out of what appeared to be boredom. The only other sound was the click of her mouse, every 30 seconds or so… the slow, prodding cadence of the Next button.

At one point there was a grunt of frustration. She searched through her purse until she found and pulled out a pair of headphones which she then plugged into the laptop to hear the sound of a video.

I wasn’t sneaking views at her screen. It was, in fact, facing away from me. I only know she was watching a video because a minute or so later she groaned at the screen and asked “Do I have to watch this video again?”

After about 90 minutes, she seemed to be getting frustrated again and made another call.  I assume in this case she was contacting a co-worker, because she asked for “help with a stupid question on that training course they’re making us take.”

That’s the chant of the satisfied learner right there.

The call continued,  and she got even more frustrated when she learned that should would not get credit if she went straight to the final test without going through all of the modules.

Towards the end of the call she asked if she could stop now and finish tomorrow. She was very concerned about this question as, and I’m quoting here, “I don’t wanna have to go through all this crap again.”

As I sat there I couldn’t help but think of the designers who created the course she was taking. How would they react to seeing what I observed? I know plenty of instructional designers, and not a single one would say they seek out creating that type of experience.  And yet I fear this user’s experience is far from unique.

I found myself wanting to learn more about her experience beyond just my observations, and decided to see if she’d mind me asking a few questions.

I greeted her and introduced myself. I’ll call her Sally, because I didn’t ask if I could use her name for this post.

I explained that I couldn’t help but notice the frustration she was having with the course she was taking. She responded with “Oh please… don’t get me started.” I explained that I really would love to hear her thoughts on it, and would like to buy her a drink in exchange for a 10 minute chat. Sally asked why I wanted to learn about it, and I explained that designing learning programs is part of my job.

What happened next was very enlightening. Sally leaned back a bit in her chair, as if there was a subconscious need to distance herself from me in some way. She wasn’t rude, but it was a noticeable reaction to learning what I do. It reminded me very much of a similar experience shared by Cammy Bean.

There are lots of careers that, justified or not, have built into them some negative connotations that convey a certain amount of mistrust of an individual just by association.  Lawyers and Politicians are two examples that immediately come to mind. Are instructional designers, whose role should be building experiences that help people achieve greater heights, really falling into the same sort of preconceptions? I certainly hope not.

Sally agreed to chat, and for the price of one Caramel Macchiato, she shared with me more of her thoughts about this course and training in her organization in general.

Let’s just say the feedback wasn’t overwhelmingly positive. In hindsight, the most insightful parts of the conversation were not the questions I asked her, but the questions she asked me.

That just reeks of “Compliance” doesn’t it? There are plenty of regulations that organizations need to follow, but that doesn’t provide an excuse for delivering a poor learning experience.

Sally also expressed frustration with annual changes. Every year the organization updates the course for whatever has changed, and because knowing the changes is important, they update the test to include those things. She understands all of that, but asks “I know they want us to take the whole course, but wouldn’t it be easier to also tell us what’s changed so we can be on the lookout for it?”

Yes Sally. Yes it would.

“I get that we have to do this, but why do they gotta make doing it so hard?”

At first I misinterpreted this question, assuming it was content-related. It wasn’t about content; she was talking about the process.

As an example, she shared her log-in frustration. She allocated about 2 hours to do this training. However, the first 20 minutes she sat in Starbucks were spent trying to gain access to the course (presumably via an LMS). Her password was not working, and she received attitude from the person she called for not remembering it. And, as she put it, “We don’t learn anything from these, and everybody knows that. They just want to know that it’s done.”

Again, she’s correct. Somewhere along the line ‘design’ has been lost. We don’t design learning experiences or performance support without first matching it against ‘our process’.

We’re so used to having courses and learning management systems as part of the learning structure that we see all solutions through that lens.  We also tend to forget LMSs and many other tools we use exist for the benefit of training departments, not for the benefit of learners. They may be necessary for some organizations – a point in itself that can be debated – but instructional designers need to stop pushing learning through ‘our process’ and start finding ways to support learning through ‘their process’: the work itself.

While I didn’t get everything I had planned for that afternoon at Starbucks done, it was productive in ways I had not expected. I think instructional designers should jump at the chance to talk with people about their experiences in learning programs. Many of us do that today, reaching out to people that experience programs we design.

My conversation with Sally was different. Because we did not work for the same organization, and I wasn’t talking about a specific program or even one I designed, the feedback seemed more genuine and raw. There was really no reason for her to filter herself, so she didn’t.

She doesn’t feel like she learns from the programs, hates the process, and just wants to finish so she can move on.

I find it hard to believe she’s unique.