TED In Cinemas – An Interesting Twist on the #TEDTalks Experience

I like TED Talks. The short, focused, video format allows are a great format for people to share and be inspired by new ideas. I subscribe to a lot of sites’ content as a means of providing a constant flow of learning and growth opportunities, and TED Talks are one of the ones I find myself gravitating towards more and more.

A few weeks ago TED 2016 kicked off in Vancouver. One day I would love to attend TED Talks live, and I know there are thousands of others that would like that experience too. It seems like TED knows this, and decided to try something new this year: TED in cinemas. Here’s the marketing preview for the event.

Being a fan of TED Talks, I was intrigued by this new experience that enabled someone to participate in TED 2016 live via simulcast. I immediately bought my ticket – which at $20 was only a bit more expensive then a typical night at the movies – and eagerly anticipated the show.

It was Inclusive: The vast majority of TED Talks I have watched have been watched at my desk, or on my phone, or on my TV (being streamed from my phone). In all of those examples, I have been watching the talks in isolation. With TED in Cinemas, there was a group of people sharing the experience together. There was even a moment midway through the talks where the in-person audience was given an opportunity to share ideas with each other. When this happened, the lights were brought on in the movie theater and those in theaters were encouraged to connect and share as well. It was a move to made the TED experience more of a group activity.

I really enjoyed TED in Cinemas. It wasn’t perfect, and that’s OK. Experiments show us what works well, and in my opinion the main takeaway from this experience is that TED in Cinemas works. There are also a few things I’d like what doesn’t work as well.

Less “Bolting on” of Simulcast: This was an experiment, and there’s nothing wrong with that. But it definitely felt like an experiment, in the sense that simulcast was a definitive afterthought. The worst part of this was the ending, which didn’t end as much as it was cut off. The last thing said by the host shared that there was more to come in the room, but that the simulcast was going to be cut off shortly. That made the simulcast feel “less than”.

Embrace the Simulcast Format: A live simulcast experience may be the next best thing to being there in-person, but it’s STILL a very different experience, one that warrants a plan that emphasizes it’s own unique format. Some quick examples:

Expand Beyond One Day: I really hope that TED in Cinemas was a resounding success that not only returns in 2017, but expands. While I understand the reasoning behind the decision to only simulcast the opening session, I’d also be lying if I didn’t admit thinking “Damn… I wish they were doing this on a different day; I’m much more interested in those speakers.”

Granted, making arrangements to simulcast a single day was probably a huge undertaking, so this is less a complaint and more a hope that interest in the format grows to the point that warrants simulcasting multiple days.

A Peek Behind the Curtain: The quality of TED Talks is top notch. While I could be applying that statement to the TED Talk content itself, in this context I’m referring to the quality of the audio and video production. There’s a high standard of quality associated with a TED Talk. The speakers always do a great job, rarely making mistakes or encountering issues. At least, that’s what it looks like in the final video.

There’s risk in broadcasting an event live. No matter how much you plan, things sometimes happen that you didn’t plan for. Things are never as perfect as the final edit appears. Such was the case with Shonda Rhimes talk. About two-thirds of the way through her talk, Shonda paused, waited, and then announced she was encountering technical difficulties. The talk stopped for about two full minutes while the teleprompter was synced up, and then Shonda started back up again. But you would never know that from watching the final video. Seeing that peek behind the curtain, as well as the before/after aspect of the edited talk, was quite enlightening.

Where was Everyone?: I thought the concept of TED in Cinemas was exciting the second I heard about it. Apparently I was in the minority, at least as evidenced by the attendance in my local theater. There were less than ten of us in the theater, which definitely muted the excitement mentioned earlier. This was surprising, as TED Talks are very popular. I’m not sure if the low attendance was reflective of disinterest, or if the marketing about TED in Cinemas failed to reach the potential audience.

A Browser That Can’t Be Closed: I mentioned earlier that the opening day of TED wasn’t my favorite list of speakers from TED 2016. I was only passionately excited about three or four of the seven speakers featured during the opening session. The others were outside my interest areas, at least in the context of TED. 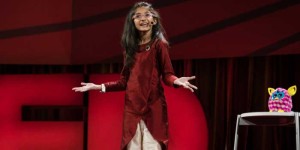 The first talk of the session was from Ishita Katyal. I did not come to TED in Cinemas for this talk, but was completely blown away be the composure of this young girl and the narrative she crafted. Her message, focused on asking children what they want to do NOW instead of when they grow up, was also very powerful. There were other talks during the session that I was not expecting to be engaged in. Some engaged me as Ishita did. In truth, two of the ones I watched didn’t connect with me at all.

But I watched them.

If I’m watching a TED Talk on my computer and after three or four minutes I’m not feeling connected ot the talk, chances are I’ll close the browser window. The thing is, you can’t close the browser on a live event. You can either watch the talk, or you can leave.

My staying in the room exposed me to ideas and concepts I might not have allowed myself to consider had I been in an environment where I could easily close the browser window the second I started feeling disconnected from the talk.

This was one of the unexpected aspects of the TED in Cinemas experience that I really appreciated. True growth only comes from venturing outside one’s comfort zone, and the TED in Cinemas format helped push me outside my own, at least for one night.

Bring on More TED in Cinemas

I really liked TED in Cinemas. From an attendee perspective, I thought it went very well. There are definitely opportunities to improve upon the format, and I hope the event returns in 2017 with even more attention allocated to the simulcast experience.