#DevLearn Reflections: Neil deGrasse Tyson and the Power of Curiousity

I’m still coming down from all of the excitement from DevLearn last week. There were so many things that were great about the conference, it’s impossible for me to talk about it all in a single post without it being exceptionally long. Instead I’ll be reflecting on specific aspects of the conference in different posts. I’m starting with what for many was a highlight of the event: Neil deGrasse Tyson. 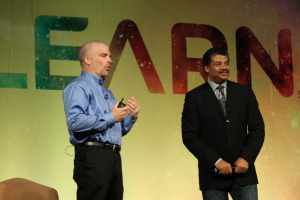 However, I’m not reflecting solely on Dr. Tyson’s keynote session – great as it was. My greatest takeaway from Dr. Tyson is an overall theme to all of my interactions with him, from my interview with him a few weeks ahead of the event, to walking with him throughout the Bellagio, to his Keynote, to sitting with him at lunch, and more. It can be summed up in a single word.

The Power of Curiosity

When I interviewed Dr. Tyson a few weeks ago, he directly spoke of curiosity when describing the differences between children and adults as it applies to science.

We tell [children] all the things to not do which in their native state are their own expressions of curiosity. So a full-grown scientist is a kid who has never actually grown up. [Children] are driven by an inner curiosity of everything that they don’t yet know. 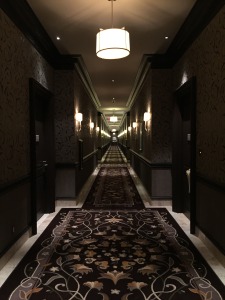 This curiosity was evident in many of the interactions I had with Dr. Tyson during his visit to DevLearn. It started shortly after I met him at his room and began walking him to the conference area. While walking down the hall, he paused and pointed out the photo at the far end of the hallway. He explained how that was the point of infinity, and started a brief conversation around that topic, explaining how the perspective created the sense that we were not getting closer as we continued down the hall. He slowly started walking again, asking me not to look at him but to look at the picture.

“Notice how it’s not getting closer?” When I did, he smiled and quipped “Pretty cool, huh?”

It was. It was also something I had never noticed before, and a reminder of how different the world can look if you view it through the lens of curiosity.

The curiosity was also evident in his book signing immediately following his keynote. Despite there being a lengthy line of people waiting and a schedule of events he needed to be at during the afternoon, curiosity was still evident in the ways Dr. Tyson interacted with attendees. Even in these brief interactions, you could see him perk up and take an extra moment to dig deeper into interesting comments guests made. This wasn’t just about engaging fans, having watched him through every interaction, you could see that he was expanding his own knowledge through the context he built-in these brief conversations.

After the book signing I needed to walk Dr. Tyson back to his room to get his bag before taking him to a luncheon. His keynote ran longer than scheduled, and he took time to accommodate every person at the book signing, so we were running a bit late. But there’s always time for curiosity. As we passed a coffee shop in the hallway he stopped short. “Come here, I want to show you something.” 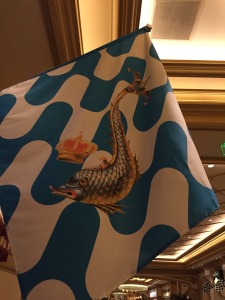 Yes, we were running behind schedule. But you know what? When Neil deGrasse Tyson says “I want to show you something”, YOU FIND TIME TO LET THE MAN SHOW YOU SOMETHING. We walked over to one of the flags hanging outside the shop.

That was all he said when we looked at the flag. Even knowing his asking the question meant there was likely a non-obvious answer, I was stumped. All I could say was “A mythical fish-like creature”.

He replied, “You’re essentially right”, and then went into the story behind the art. The image was actually not of a fish, but of a whale. It was painted based on very limited information early sailors had. They had seen giant beasts in the ocean but did not know what they were. They feared them. This was the imagery that came out if it.

There’s a story, and a deeper understanding, behind just about anything we encounter in life. The question is if we’re curious enough to look for it.

My brief time with Dr. Tyson closed with a luncheon in which he was the invited guest. A number of people asked him questions, and you could see his inner curiosity evident in the way he answered. Sure, we were learning from him, but he was also learning by digging deeper into the context of the questions.

What also impressed me was that he never answered a question with “That’s outside my area of expertise”. There were times a question presented him with something he wasn’t an expert on or did not know about. and he did admit that. But instead of having that be the end point of the conversation, he saw it as a new beginning, flipping the question on its head and asking the person asking it to tell him more about it. I also saw him revisiting some of these areas with people as the luncheon closed.

Tyson described children as naturally curious until we – the adults – beat it out of them. My time with Dr. Tyson reminded me curiosity is the foundation of lifelong learning, and that we need to embrace it in every sense of the word. We need to be curious in our life, in our personal development, and in the perspective we approach building learning and performance programs for others. The more we embrace curiosity, the more learning will become part of the natural state of the people we support.

Which is, as Dr. Tyson said to me that morning, “Pretty cool, huh?”

← The Learning 2014 Conference Backchannel: Curated Resources
How Technology is Changing the Future of Learning – Resources Shared at @ASTDMidNJ →